BEAUTY FOR ASHES – HELP FOR A HURTING WIFE

DAY 16 – Are You Dwelling on your Husband’s Sins?

Matthew 7 3 – Why do you look at the speck of sawdust in your brother’s eye and pay no attention to the plank in your own eye?

When my husband first confessed to me about his struggle with pornography, I remember looking at him with shock and disgust.  I actually went to the bathroom because I thought I was going to be physically sick.  Obviously, I was feeling hurt, betrayed, angry and stupid because I’d been fooled and lied to all these years, which was a natural, immediate response to such news.  However, instead of forgiving him and becoming united with him in order help him and to work it out between us, I began to feel sorry for myself.  I was bitter for a long time and when I looked at my husband I would see him as a “bad” person and me as the victim.

I Was Wallowing in Self-Pity

I enrolled in an online course for spouses whose husbands were involved in pornography and I began to see that I, too, was sinning because I wasn’t letting go of the wrongs done to me and I was looking at my husband’s faults of viewing pornography (which was in the past by then) and his anger issues at that time, as being worse than my faults.  I was judging him and I was not seeing my own bitterness and self-pity as a sin in God’s eyes.  I refused to acknowledge that he was changing and was being set free from the emotional damage that his guilt had caused.

Ask God to Help You

I had to ask God to help me cast out the plank in my own eye in order to make me more clear-sighted, to be more sympathetic towards my husband’s past and present struggles at that time.

Focus on Your Own Shortcomings First

Jesus was very clear and straight about pointing out other people’s faults. He calls us all hypocrites when we condemn others.  He said that other people’s faults are like a speck of dust compared to our faults which were like a wooden plank or board.  Why is it, we can’t seem to diagnose our own faults, but yet it’s so easy to see everyone else’s?

This is not to say that our husbands don’t have faults, bad habits and sins. Like all of us, they do. Nor am I trying to make light of what he has done and how you have suffered from the repercussions of those sins.  But despite that, God wants us to focus on our own faults first.

Start everyday with asking Jesus to illuminate your own faults and then asking for His help to fix them.

What is Your Motive for Pointing Out Your Husband’s Sin?

Is your motive to help him recover and get back in full fellowship with the Lord or is it to criticize and condemn him?  Our motive should always be towards restoration and not condemnation or humiliation. 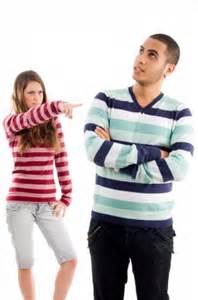 Of Course I get angry, but it’s only because of how he treats me!

If you say this, you are excusing your own sins by blaming them on your husband.   Adam blamed Eve when God confronted him for sinning, but God did not accept his excuse, just like He will not accept ours.  Every person is accountable for his/her own choices.

No matter what your husband does, or how he treats you, the Bible tells us we need to respond in a Christ-like manner.  “Do not repay anyone evil for evil” and “Do not be overcome by evil, but overcome evil with good”  Romans 12:17 & Romans 12:21.

But He’ll Take Advantage of Me!

Maybe you are afraid that if you focus on your own shortcomings, your husband will take advantage of this.  It is possible, but most likely your change in attitude could inspire him to change too.  Keep bringing your husband to God in prayer.

Spend some quiet time with God, asking Him to show you how to see more clearly and to respond in the way He would want you to respond.

Listen to your husband.  Seek to truly understand his opinions and emotions. When you understand where he is coming from, look for ways to minister to him as you talk.

Do Not Allow Physical Abuse

You should never allow physical abuse. Be prepared to take action by contacting the Police or Social Services. Acts 25:10-11 tells us what to do in times like this.

If you start to point out your husband’s faults before removing the plank from your own eye, you will not see clearly and you will probably do more harm than good.  Galatians 6:1 tells us “Brothers, if someone is caught in a sin, you who are spiritual should restore him gently.” After the plank is removed from your own eye, with God’s grace, you will be able to help your husband in a loving, courteous and respectful manner.

I didn’t really show much grace to my husband at first, I didn’t think he deserved it, but then did Jesus deserve to be whipped, beaten and crucified for me?  He still loves me the same, even though I have failed him many times.  I asked God to give me grace and a supernatural love and understanding for my husband.  I began to see him in a new light, and we are both able to help each other get through our shortcomings.

God has restored all those years the locusts had eaten and I believe He will do the same for you too!